Revisit The Rumi Darwaza Through Chikankari 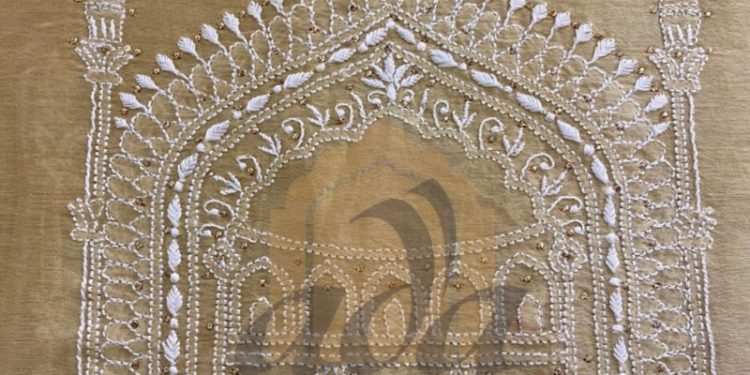 The Rumi Darwaza of Lucknow is one of the most remarkable architectural structures in India. The term “Rumi” is derived from modern-day Rome that once used to be Istanbul, the capital of the Eastern Roman Empire. It was constructed in the year 1784 by Nawab Asaf-ud-Daula and is one of the finest examples of the marvellous artistry of Awadh. The famous landmark also goes by the name Turkish Gateway due to its design similarity to a gateway in ancient Constantinople. From the octagonal umbrella to the intricate floral patterns, every carving on this masterpiece speaks volumes of Awadh’s unique style and eye for detail.

Another example of Lucknow’s artistic finesse and craftsmanship is chikankari. Chikan, in the literal sense, means ’embroidery’. The exquisite, handcrafted artwork was introduced by the Mughal Queen of the Emperor Jehangir, Noor Jehan.

In contemporary times, wearing symbols that are linked to national pride has become a trend. So, Ada is not leaving any stone unturned in becoming a trendsetter.

Depicting the signature architectural brilliance of Lucknow through the Rumi Darwaza and blending it seamlessly with the intricate artistry of chikankari, the artisans at Ada have created an embroidery masterpiece, one that is truly for the ages.

Ada is renowned for creating one of the most authentic and sought-after works of chikankari that one can find today. By consistently unveiling new designs and handcrafting them to perfection, every piece of work that takes shape is a masterpiece, much like the design inspiration.

Over the years, Ada has successfully conceptualized the traditional art of Lucknow as a timeless fashion statement

Ada Chikankari addresses the trend of Lucknowi Chikankari Kurtis, suits, sarees and bags that are stitched to perfection and symbolize style and elegance.

Ada Lucknow Chikankari variants are the artisan-made beautiful crafts of India and have become a trendsetter over the years.

Apart from it, Ada’s home décor range also serves the topmost quality in bringing charm to the lives; the variants are bed linen, table linen, curtains, coasters, cushions and tea.

Through stitching Rumi Darwaza, Ada has become a rhythm of the heartbeat of Lucknow natives as it has successfully imprinted the city’s flavour. If you want to boast Lucknow’s heritage in the form of Rumi Darwaza, then you must adorn the same in your outlook.

KnowYourCraft: How Chikankari Is Classified As A ...