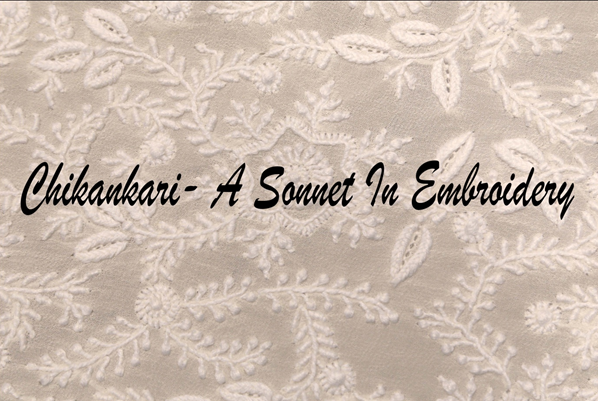 The origin of Chikan is not authenticated historically but has been interpreted over the years by the citations of either the traders or less commonly by the embroiderers. The most satisfactory definition of chikan today would perhaps be ” any thread embroidered article that comes from Lucknow”. Several writers have tried to probe the word for clues but there is no certainty, and certainly no consensus on the origin or the meaning of chikan. The most commonly believed derivative is from the Persian word Chikeen, meaning “floral motif on a fine cloth”. Which is not true as in the Persian dictionary this word cannot be traced. A lesser known story bespeaks of this kind of embroidery being practised in a village called chikan in the Komehr district of Fars province in Iran and the workers were brought from there on the behest of Emperor Jehangir for his lady love, Noor Jehan, who belonged to Iran.

There is also no historical evidence, though probed by many writers, as to how this art of embroidery thrived in the city of Lucknow and remains today the only place on this earth where it is produced. There are various tales and folklores narrating the start of this art, the most popular being that Empress Noor Jahan brought a few artisans from Persia where she had seen a filigree on a revered mausoleum, which she wanted to be embroidered on her dress. Later, during the reign of Nawabs in Oudh, these workers who were mostly women, were patronised in their households to embroider their attires, mostly caps. After the mutiny the British and the elite of Lucknow employed them and they were commonly known as’ mughlanis’. Apart from making fine chikan work on the garments, they excelled in story telling sessions too.When the King of Oudh, Wajid Ali Shah was dethroned by the British and exiled to Calcutta, a few of the court embroiderers followed him and later settled there. It is believed that their progeny continued this art in Matiaburj, Calcutta, but discontinued as they  were not appreciated economically over there.

Chikankari received great impetus during the Nawabi period. The finely embroidered muslin came to be closely identified with the Nawabi culture and became an intrinsic part of it. The Chikankari tradition gradually filtered down the masses of successful  people and became a part of their daily life.

The source of most design motifs in Chikankari is Mughal. These motifs can also be seen in the ornamentation of Mughal buildings like the Taj Mahal and the monuments of Fatehpur Sikri. There are various stitches used in Chikankari. They vary according to the kind of motifs used . The most frequently used stitch is the bakhiya  stitch. This is a very delicate and minute stitch.

The era of the Nawab’s had a major impact on the evolution of Indian textile and fashion. As the Nawabs got richer, they spent elaborate amounts of money on their dresses. Needless to say the Begums were not far behind and the emphasis on costumes and textiles soon trickled down to the people of Lucknow.

Lucknow has been the citadel of ethnic culture of India. It’s habitation  has been chronicled by historians in diverse views, the most popular being referred to a mythological saying that Laxman, the brother of Lord Ram, shot an arrow which fell on a land which was named Lakhanpur and was revered by the sages of that era who inhabited it by the river Gomti which still flows through this city and is the lifeline to it.

Apart from boasting of its cultural heritage, the land today produces myriad forms of arts and craft. Chikankari being most popular  . Though, this handicraft art did not originate in India, it flourished in Lucknow and presently it is practised by over 5 lakhs  artisans.

First  stage a design is selected and the motif is traced on a wooden block which is then engraved by a craftsman. When the chikan artisans were brought to Lucknow by the Mughals , to find wood engravers to carve design blocks,was an uphill task. There were, however, quite a few Zarbuland craftsman, as this art, also known as tarkashi, was similar to Bidri work, which specialised in very intricate carving albeit on metal. It became easier for these artisans to defect to wood carving which to them was easier and better in wages. In the process the art of Zarbuland suffered and is now on the verge of extinction.

Second stage was the block printing. The workers were abundant in Faizabad region, who migrated to Lucknow for greener pastures. To block print chikan designs on fabric, a special ink was prepared which could stay on the fabric for months together as it takes a long period to embroider, and in the process of making it gets soiled too. Indigo dye is mixed with tallow and finely grounded chaff for a lasting effect, which is washed thoroughly after it is made.

Third stage is the main embroidery stage. Various stitches are selected for a design and the worker embroiderer then sees the effect and continues after making changes if required and a chikan outfit gets ready before going to a sartor for final touches.

Defining chikan in terms of its stitches usually produces exercises in abstruse categorisation rather than illustrating how the work is done. There are 32 stitches of chikankari and it is practised by artisans in a group .  Averagely one set of artisans master 4 to 5 stitches . So a garment has to pass through 3 to 4 groups depending on number of stitches used in the product .    Every stitch of chikankari denotes a theme of its own. It’s appreciation can only be physically visualised.

There is a discipline and method in the application of the stitches. The darn stitch is worked on rough cotton fabric to fill angular designs and to cover the surface of the fabric, while satin stitching is done exclusively on delicate fabrics like silk, muslin, or linen. In chikan some stitches are worked from the wrong side of the fabric, while others are worked from the right side. It is however unique in its discipline in as much as stitches designated for a particular purpose are used only for that purpose — they are not replaced by other stiches. For example, the chain stitch (zanjeera) will only be used for the final outline of a leaf, petal, or stem.

Different specialists groups work with different types of stitches. For example, open work or jaali is not done by embroiderers who do the filling work – each set of  worker completes his/her bit and the fabric is then sent to the next set of embroiderers. The wages for each job are fixed separately.

Chikan embroidery has a repertoire of about 32 stitches of which about 15 to 20 are still being practised . These can be broadly divided into 3 heads – flat stitches, raised and embossed stitches, and the open trellis-like jaali work. Some of these have equivalents in other embroideries, the rest are manipulations that make them distinctive and unique. They cover almost all the embroidery stitches of the country and have interesting and descriptive names, inspired either by nature, Jewellery or even a hairstyle, explained earlier.

The fourth stage comes when the fabric is embroidered it goes for washing. Skilled professional washermen are only capable of cleaning the embroidered fabric of all stains of ink and dirt accumulated over a period of time. Now it is chemically washed and then washed in the river Gomti, which probably has certain properties to give the fabric a clean new look. In the early period when even soap was not available, the clothes were first soaked in a watery solution of reetha (Sapindus or soapnut) and then rinsed in the river Gomti. The process was repeated till the fabric was cleaned. Cottons were then starched with either rice starch or arrow root powder, the latter was preferred as it also provided a sheen to the fabric.

The fifth and the last stage is the finishing of the product where the superfluous embroidery threads are snipped off. Though this seems to be a simple job but it also requires certain amount of dexterity, else the garment can be damaged in this process.